Lara Croft has received a star on Derby’s Walk of Fame in recognition of the former studio who first created her. Core Design were based in Derby and developed Tomb Raider, starring Lara Croft, in 1996.

Former employees of Core Design including Tomb Raider composer Nathan McCree, lead programmer Gavin Rummery and level designer Heather Stevens attended the unveiling event, which was covered by Derby Telegraph. Hop on over to Derby Telegraph to view a collection of photographs from the event.

Core Design produced a string of hit video-games including Rick Dangerous, Thunderhawk, Project Eden and Tomb Raider. Tomb Raider became one of the most successful video-game franchises of all time with total sales of 74 million units to date. 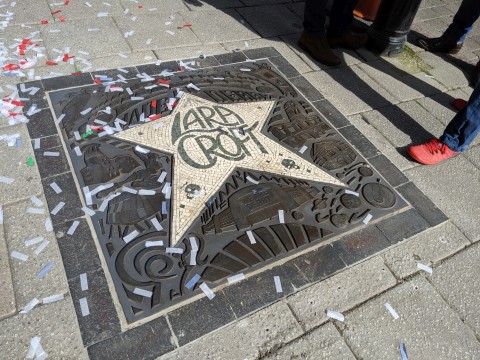 In Our Time: A Podcast Series on the History of Ideas Automated Fix – Improved Graphics, Resolution, Music + Expansion Pack

Executive Producer Dallas Dickinson on the future of Tomb Raider

Please support this website by adding us to your ad-blocker whitelist. Our hosting, domain and security costs are paid for purely through advertising! Please consider purchasing a paid subscription to our site to get rid of ads. :)