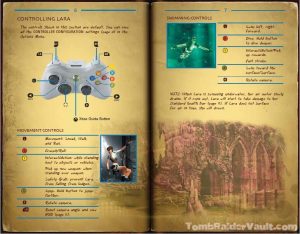 The controls shown in this section are default. You can view all the CONTROLLER CONFIGURATION settings in the Options Menu.

NOTE: When Lara is swimming underwater, her air meter slowly drains. If it runs out, Lara will start to take damage to her standard health bar (page 11). If Lara does not surface for air in time, she will drown.

In combat, always remember these two key elements:
■ KEEP MOVING – Keeping Lara moving is the most important factor in combat; her continually changing position slows the enemy’s advance. A moving target is much harder to hit than a static one.
■ MANIPULATE THE ENVIRONMENT – Constantly check for objects in the environment that Lara can manipulate to her advantage. For example, she can thwart enemies by blocking paths, collapsing structures, detonating nearby explosives and releasing obstacles.

■ SLIDE ATTACK Target enemies while running toward them, then press B to slide. Lara slides into enemies, knocking them off balance and setting them up for her guns.
■ AERIAL ATTACK Press A twice when close to the enemy. With the first press, Lara jumps at an enemy. As she lands on the enemy, press A again to activate slow time, then immediately pull RT to fire, shooting the target.
■ POWER KICK Pull and hold LT and press Y to kick the target enemy away with Lara’s boot.
■ GRAPPLE Pull and hold LT and press X to use Lara’s grapple to pull enemies toward her and inflict some damage.

TIP: If the target is within distance but off-screen, an arrow appears showing the direction of the target’s location.

■ HEALTH BAR The health bar gauge displays Lara’s current health level. When Lara’s health gets dangerously low, you need to replenish it using a health pack (page 13) if available.
■ USE ITEMS (PLS, Health Pack, Binoculars) To use an item or gadget from Lara’s inventory, press the D-Pad in the corresponding direction:
Up – Health pack (use)
Down – Switch weapons (toggle)
Left – PLS (on/off)
Right – Binoculars (on/off)

The PDA is Lara’s automatic data capture and wireless communication device. It holds all of her mission data and real time objective and equipment information. Press Back to access Lara’s PDA, which displays the following data:
■ OBJECTIVES – Provides Lara with information on her current objectives and overall mission objectives.
■ DATA – Provides information for completed missions, and allows you to keep a tally of rewards collected while playing the missions.

■ GEAR – Provides Lara with information on all her inventory. Here you can view stats and descriptions of each weapon and item Lara has.

A staple of the rough-and-rugged adventurer, health packs allow Lara to treat her injuries in the field.

NOTE: Lara can carry a maximum of three health packs.

Ultra-bright LED portable light source. Kinetically charged, the PLS shines for a limited time before shutting off to recharge.

Using her grapple, Lara can manipulate objects from a distance, climb or drop to different heights, and swing across large gaps. The grapple consists of a magnetic grapple head that can latch onto discrete, visually distinct surfaces, plus a lengthy wire and an automatic recoiler.

NOTE: The grapple can only be used on specific shiny metallic surfaces.

The RAD, a pair of high-tech lenses in Lara’s inventory, perform the following functions:
■ BINOCULARS Magnify the image in the field of view.
■ RAD MODE Analyze and provide a readout for objects in view that have significant archeological or technological interest.

Legend X-Box 360 – Getting Started Anniversary – About The Game