Starting a game: Before use, carefully read the instructions supplied with the PS3™ computer entertainment system. The documentation contains information on setting up and using your system as well as important safety information. Check that the MAIN POWER switch (located on the system rear) is turned on. Insert the Tomb Raider disc with the label facing up into the disc slot. Select the icon for the software title under [Game] in the PS3™ system’s home menu, and then press the S button. Refer to this manual for information on using the software.

Quitting a game: During gameplay, press and hold down the PS button on the wireless controller for at least 2 seconds. Then select “Quit Game” from the screen that is displayed.

To remove a disc, touch the eject button after quitting the game.

Saved data for PS3™ format software is saved on the system’s hard disk. The data is displayed under “Saved Game Utility” in the Game menu.

Tomb Raider is the first chapter in the story of Lara Croft. As the game begins, Lara is a young college graduate, eager to find adventure and make her mark on the archaeological world. With her best friend Sam, Lara joins an expedition aboard the research vessel Endurance in search of the lost kingdom of Yamatai.

Thought to have existed on an island somewhere off the coast of Japan, Yamatai’s true location has remained a mystery for centuries. Trusting in Lara’s research, Conrad Roth, captain of the Endurance, takes the expedition into a dangerous area of the sea known as the Dragon’s Triangle. It is here that everything goes horribly wrong and Lara discovers the true price of adventure.

Main Menu
Continue – Continue an existing game from one of three save game slots.
New Game – Start a New Game in one of three save game slots.
Multiplayer – Enter the multiplayer menu to start or join a match, or customize your multiplayer characters and loadout.
Extras – View videos, concept art, and character models that you have unlocked.
Options – Set your preferences for Display, Audio, Gameplay, and Storage Devices.
Trophies – Track your progress.
Downloadable Content – View available and purchased DLC offers.
Square Enix – Access your Square Enix account and post your progress to Facebook.
Square Enix Trailers – View trailers for Square Enix games. 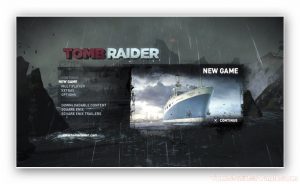 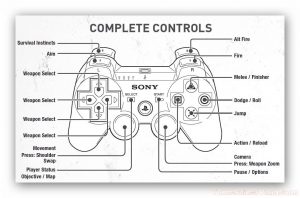 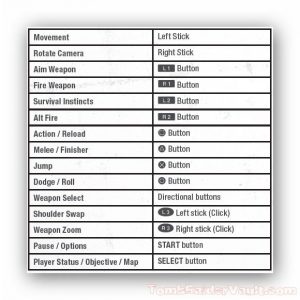 Movement in Tomb Raider is fluid, responsive, and natural. To move around, press the Left Stick in the direction you want Lara to go. Lara will move forward to seamlessly interact with her environment; climbing, crouching, or moving in and out of cover without additional button presses. Often Lara will have to jump, climb, and crawl while traversing the island in order to reach her destination.

Lara is an expert climber who can use skills and tools she acquires on her adventures to scale dangerous cliffs and structures. As long as there is a ledge or platform in reach, Lara will move towards it with a simple push of the Left Stick. Lara can also use flat vertical surfaces to scramble up to areas that are inaccessible with just a normal jump. Sometimes a ledge will be unable to support Lara causing her to lose her grip; these instances will be indicated by an Action button icon. Press this button to help Lara recover from the perilous situation. There are some instances where Lara may need to drop down from where she is climbing, pressing the Dodge button will cause Lara to drop and if there is a ledge below her position she will grab onto it.

At any time, you can press the SELECT button to bring up the Map and Objective screen. This menu shows where Lara is located on the island, her next objective, the status of the region, as well as other useful information about the area. A diamond icon on the map indicates the location of the next objective. This icon can also be viewed by activating Survival Instinct during gameplay.

Important landmarks and collectibles such as Camps, Tombs, Relics, and Documents will appear on the map after you find or collect them. You can unlock these items on the map without finding them by discovering a Treasure Map or completing a Challenge Tomb.

While viewing the map you can use the Left Stick to move the cursor around. The L1 button will zoom in while the R1 button will zoom out so that you can alternate views between the region you are currently in and the entire island. The Triangle button will center the map on Lara. You can also set a waypoint by moving the cursor over a location on the map then pressing the Jump button. This waypoint can be viewed both on the map and by activating Survival Instinct during gameplay and looking for the blue column of light. 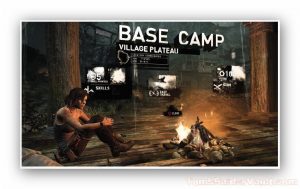 Lara has a keen sense of Survival that can be relied upon to find items and objectives or determine what needs to be done next. Pressing the Survival Instinct button will cause anything that can be used or attacked to light up as well as displaying the Objective Beacon which guides Lara towards her next destination.

There are many treasures waiting to be discovered on the island. By locating Relics, Documents, and GPS Caches Lara can earn experience points while also learning about the history and current activities of the island. Any collectibles that have already been discovered can be viewed at any time by pressing the SELECT button to bring up the Player Status menu.

Additionally, Lara can find ammo boxes, food, and Salvage throughout the island. Ammo boxes will help Lara replenish ammunition for her various weapons, food provides additional experience points, while Salvage provides Lara with raw materials that she can use to upgrade her weapons.

Lara arrives on the island without any combat experience, but she quickly learns the skills required to survive. Lara can use a range of weapons, hand to hand combat, or stealth to deal with the hostile inhabitants of the island. As Lara becomes more experienced she will acquire new weapons as well as skills that allow her to use her resourcefulness to better defend herself against the harsh challenges she faces. 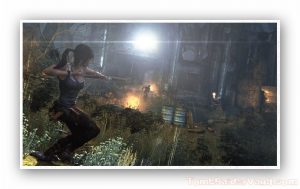 As Lara hones her skills and explores the island, she must gather and build equipment to aide in her survival. Some gear can be acquired by progressing through the story, but most advanced weaponry and gear must be found by gathering Salvage and Broken Weapon parts and upgrading at a campsite. Lara’s primary weapons are her Bow, Pistol, Shotgun, and Machine Gun. Each serves a different purpose and allows Lara to approach combat situations using a variety of tactics. She also carries an axe which can be used for both exploration and combat. 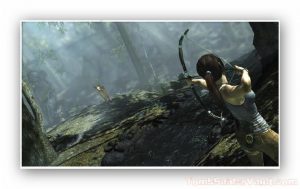 During Lara’s time on the island she is forced to grow into a Survivor and learn skills for making it in a hostile environment. These Skills can be unlocked by acquiring Experience Points through completing objectives and finding collectibles. There are three types of skills available to Lara: Survivor, Brawler, and Hunter skills. Survivor Skills help Lara to improve her awareness of the environment and ability to manage her resources. Hunter Skills help Lara to improve her ability to combat enemies with her weapons. Brawler Skills help Lara improve her skills in hand-to-hand combat. Many of these skills are not initially available to Lara but become options once she has already learned a certain number of basic skills.