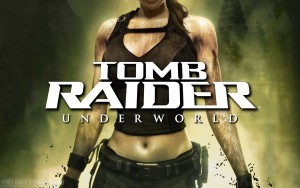 Designed specifically to take advantage of the latest technologies Tomb Raider: Underworld represents a new advancement in exploration-based gameplay. As fearless adventurer Lara Croft explore exotic locations around the world, each designed with an incredible attention to detail resulting in breathtaking high-definition visual fidelity that creates a truly believable world and delivers a new level of challenge and choice.

For generations, stories have been told of the fearsome weapon of the Norse god Thor. Legend holds that he who wields the hammer has the power to smash mountains into valleys and the strength to destroy even the gods. For more than a thousand years it has existed only as a myth…until now.

In an ancient ruin on the floor of the Mediterranean Sea, Lara Croft uncovers proof of the Norse underworld and the mythical hammer. As she attempts to unravel the secrets behind these myths, Lara’s perilous journey leads her toward a forgotten power that, if unleashed, could lay waste to all civilization.

– Master your surroundings: Reach new heights with the broadest range of acrobatic abilities and utilize objects within the environment to uncover new paths to explore.
– Explore epic and unknown worlds: Discover ancient mysteries of the underworld hidden within the coast of Thailand, frozen islands of the Arctic Sea, the jungles of Mexico, and more.
– Treacherous and unpredictable challenges: Each level is an elaborate multi-stage puzzle masked within an interactive environmental playground offering more flexibility over how the area is solved.
– New range of combat options: Choose to pacify or kill, target multiple enemies at once with the new dual-target system, and shoot with one hand while suspended with the other.
– New state-of-the-art gear: Utilize the latest technology in Lara’s upgraded inventory to navigate the world including:
o Active Sonar map: A revolutionary new tool that emits an active sonar ping to create a 3D image of Lara’s surroundings, perfect for uncovering hidden items and locations.
o Multi-purpose grapple: A claw-like device with a high-tension cable designed for climbing, rappelling, performing wall runs and manipulating objects within the environment.
o All-terrain hybrid motorbike: A unique vehicle design built to drive on everything from mud to snow and ice.

Please support this website by adding us to your whitelist in your ad blocker. Ads are what helps us bring you free content! Thank you!
We use cookies on our website to give you the most relevant experience by remembering your preferences and repeat visits. By clicking “Accept All”, you consent to the use of ALL the cookies. However, you may visit "Cookie Settings" to provide a controlled consent. Please visit our website's privacy policy for more information.
Cookie SettingsAccept All
Manage consent

This website uses cookies to improve your experience while you navigate through the website. Out of these, the cookies that are categorized as necessary are stored on your browser as they are essential for the working of basic functionalities of the website. We also use third-party cookies that help us analyze and understand how you use this website. These cookies will be stored in your browser only with your consent. You also have the option to opt-out of these cookies. But opting out of some of these cookies may affect your browsing experience.
Necessary Always Enabled
Necessary cookies are absolutely essential for the website to function properly. These cookies ensure basic functionalities and security features of the website, anonymously.
Functional
Functional cookies help to perform certain functionalities like sharing the content of the website on social media platforms, collect feedbacks, and other third-party features.
Performance
Performance cookies are used to understand and analyze the key performance indexes of the website which helps in delivering a better user experience for the visitors.
Analytics
Analytical cookies are used to understand how visitors interact with the website. These cookies help provide information on metrics the number of visitors, bounce rate, traffic source, etc.
Advertisement
Advertisement cookies are used to provide visitors with relevant ads and marketing campaigns. These cookies track visitors across websites and collect information to provide customized ads.
Others
Other uncategorized cookies are those that are being analyzed and have not been classified into a category as yet.
SAVE & ACCEPT