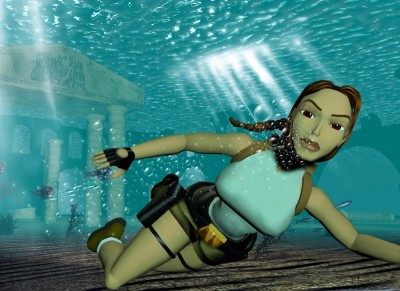 Walking
By pressing Shift in conjunction with the Cursor keys, Lara can carefully walk forwards or backwards. While Shift is held down, Lara will not fall off any edge. If you walk up to an edge Lara will automatically stop.

Side Steps
Side step Left (Delete) and right (Page Down) do exactly as you might imagine.

Roll
Selecting Roll (End) will make Lara dive forward, and finish up facing the opposite direction.

Jumping
Lara can jump in any direction, to evade her enemies. Press Alt and Lara will jump straight up into the air. If you press a direction immediately after pressing jump, Lara will jump in that direction.

Swimming Underwater
If Lara finds a pool of water, she can jump in, and have a jolly good swim around. Lara can hold her breath for about two minutes, if she is still underwater after that she’ll drown. Pressing Up Down Left or Right makes Lara move in that direction. Pressing Alt makes Lara dive under the surface and begin to swim. Lara can pull levers and pick up objects under water. Just position Lara as close as you can and press Action (Ctrl).

Swimming on the surface
Left and Right will rotate her, and Up and Down make her swim in those directions. You can also use the side step actions (Delete & Page Down) to swim Left or Right when on the waters surface. Pressing Alt will make Lara dive under the surface again, pressing Ctrl when Lara is close to an edge will make her climb out.

Attacking
Lara starts the game carrying two pistols. Later in the game she may find some extra weapons.

If you want to shoot a different enemy, simply let go of Ctrl, and Lara will pick a new target. While you have your guns out, Lara can no longer do anything that would involve the use of her hands. These are as follows:

Vaulting
If Lara is faced with an obstacle that she can climb over, pressing Up and Ctrl will make her vault onto it.

Grabbing hold
If Lara is near to a ledge while she is jumping, pressing and holding Ctrl will allow her to grab the ledge in front of her and hang there. Press Left or Right, and Lara will shimmy sideways. Pressing Up will make Lara climb up to the level above. Let go of Ctrl and Lara will drop. Picking objects up Lara can retrieve objects and store them in her inventory. Position Lara so that the object you want to retrieve is in front of her feet. Press Ctrl and she will pick it up.

Pushing/Pulling Objects
Lara can move certain blocks around and use them to climb up to greater heights. Stand in front of the block and hold Down Ctrl, Lara will get into her ready stance. Once she is ready, press Down to pull the block, and Up to push it, if you decide you no longer wish to carry on with this task, simply release Ctrl.

Looking around
Pressing keypad 0 (Insert) will return the camera to directly behind Lara, whatever the camera is currently doing. With kepad 0 (Insert) held down, the Cursor keys allow Lara to look around her. Once you let go of the button, the view returns to normal. (tip- if you are trying to line Lara up for a jump, and the camera is in an awkward position, pressing kepad 0 (Insert) on it’s own will show you exactly what direction she is facing.)

In Game Menu Rings
Whilst in-game pressing Escape will display the Menu Rings
• Press Left and Right to rotate the menu ring.
• Press Enter to use or select the foremost item ready for use.
• Press Up or Down to swap between Inventory, Items and Options rings (see menu ring for details of the options available.)